To the Tubman African American Museum

In 1981, Father Richard Keil, pastor of the Saint Peter Claver Catholic Church, made a down payment on a vacant, 8,500-square foot warehouse and former nightclub in downtown Macon.  This purchase marked the realization of Keil’s dream of almost twenty-two years to create a museum in the South dedicated to African American history and culture.  Members of the Saint Peter Claver Church congregation, local high school students, community volunteers, and other supporters donated their time, energies, and money to repair and clean the building, and in 1985 the Harriet Tubman Historical and Cultural Museums opened its doors to the public.

The Harriet Tubman Museum was named in honor of the courageous African American woman, known as “the Moses of her people,” who escaped bondage and then led hundreds of other slaves to freedom.  The Museum grew over the years to 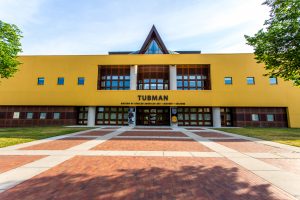 become one of the largest institutions of its type in the region.  In the process, the Museum also changed its name to the Tubman African American Museum to better reflect the organization’s expanded mission to educate people about African American art, history and culture, and to promote harmony among all races.

Since its founding in 1981, the Tubman Museum has grown from the dream of a single citizen to a source of pride for a diverse and growing community.  Today, the Museum represents a key educational and cultural resource for Georgia and the entire Southeast, offering a wide array of exhibitions, programs, and services geared toward children, adults, families, students, and teachers.  Though it has evolved over the years, the Museum has remained true to its original goal, to be a source of experiences that enrich cultural understanding, and to present the highest quality art to the communities it serves.  As it continues to grow, the Tubman Museum honors its unique origin and traditions while strengthening its commitment to educating people about African American art, history, and culture.