In 1981, Father Richard Keil, pastor of the Saint Peter Claver Catholic Church, made a down payment on a vacant, 8,500-square foot warehouse and former nightclub in downtown Macon.  This purchase marked the realization of Keil’s dream of almost twenty-two years to create a museum in the South dedicated to African American history and culture.  Members of the Saint Peter Claver Church congregation, local high school students, community volunteers and other supporters donated their time, energies and money to repair and clean the building, and in 1985, the Harriet Tubman Historical and Cultural Museums opened its doors to the public.

Since its founding in 1981, the Tubman Museum has pursued its mission through the collection, preservation, exhibition and interpretation of works of art and historical artifacts related to the broad sweep of African American history and culture.

Mural, from Africa to America

The timeline of the mural illustrates the origins of man from Africa to America. It is composed of nine panels with seven created in 1988, 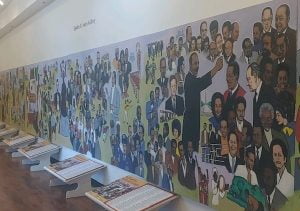 the eighth in 1996, and ninth and final panel in 2009. Wilfred Stroud, a local Georgia artist, created the mural. He attended Morehouse College and Cooper Union Art School in New York and he proudly served in the U.S. Army during the Korean Conflict. The U.S. Postal Service employed him for over 30 years.

Measuring 68 inches tall and 55 feet long , our mural travels through time exploring the feats of African Americans from past to present.

While the full impact of African Americas on the social, technological, and commercial development of the United States cannot be measured, this 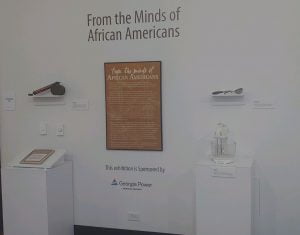 exhibit celebrates the creativity, as well as the ingenuity and perseverance of African American inventors.  The individuals and achievements presented in this exhibit are not intended to represent the full scope of the contributions of African Americans, but rather a small 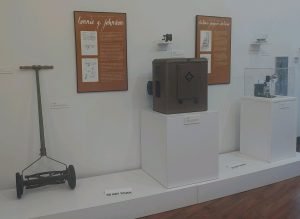 sampling of objects and information about some very special individuals.  Inventors in this exhibit include Garrett Morgan, Lonnie Johnson, Sarah Boone and Alice H. Parker among many others.  Though small in size, this exhibit tells a big important story; that the quality of daily life for every American has been improved through the mostly unsung genius of African American scientists, inventors and businessmen.

The Tubman Museum and The Historic Macon Foundation have come together to present this very special exhibition.  Untold Stories: Macon’s

African American History was conceived by the museum and made possible through the generous sponsorship of HMF.  Untold Stories documents some of the people and places that have had a significant impact on the African American community in Macon.  For the museum, this exhibition 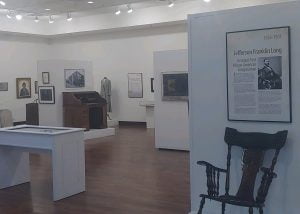 represents another step in its initiative to present local stories that illuminate elements of the African American experience.   For HMF, the sponsorship of this exhibition is an expansion of their work to preserve and share the history of the Macon community.  The Tubman Museum thanks the Historic Macon Foundation for being the Presenting Sponsor for this exhibition and for their commitment to a promising partnership between local institutions that share common ideals and goals.

In the history of American popular music, Macon, Georgia is a source of much innovation and artistry.  This exhibition tells

stories of the people and places that made Macon, Georgia an important site in the evolution of R&B, Soul, Southern Rock and American popular music in general.  Beginning with Little Richard Penniman’s rise to international stardom in the 1950’s, A Legacy of Soul explores and celebrates both local artists like Reverend Pearly Brown and Johnny Jenkins as well as nationally known performers such as James Brown, Otis Redding

and the Allman Brothers Band.  It also pays tribute to important performance venues like the historic Douglass Theatre, Adams Lounge and the Roxy Theatre, as well as local institutions like WIBB-AM Radio that in the 1950’s and 60’s nurtured the careers of these important artists and established Macon, Georgia as a center of creative energy and musical innovation.