The Tubman Museum offers four traveling exhibits which highlight African American contributions to American culture.  The exhibits are titled Mate Masie: “What I Hear I Keep”, From the Minds of African Americans, Out to Change the World: The Life and Works of John Oliver Killens, and Showing the Way: National Black Leaders from Macon, 1824 – 1933.  These exhibits combine photographs, bold graphics and informative text to enhance the learning experience. 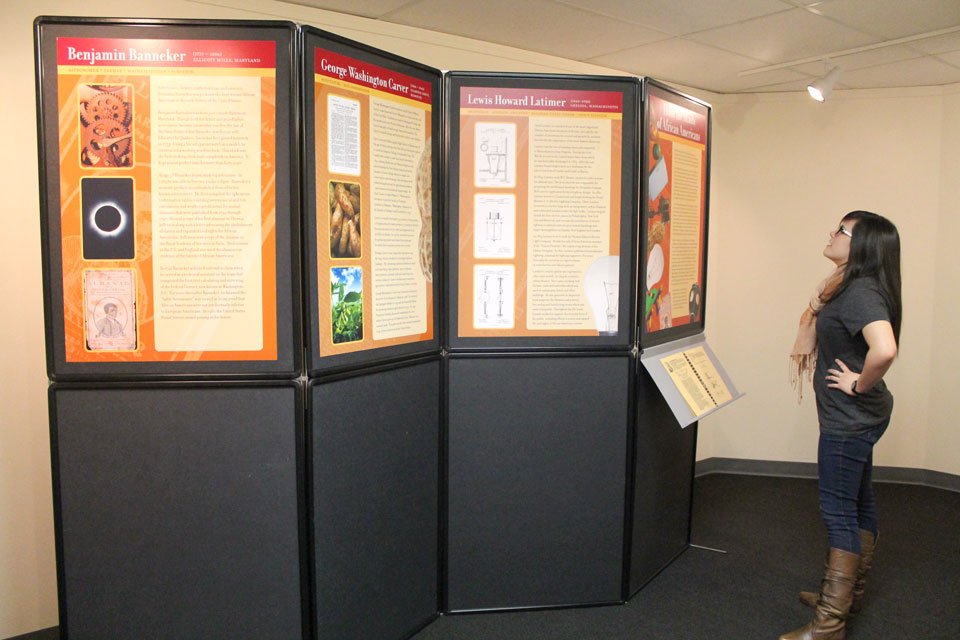 Mate Masie: “What I Hear I Keep”

The title of this exhibit comes from the West African Adinkra symbol for wisdom and understanding.  Adinkra are small, symbolic designs initially used to decorate fabrics worn on special occasions.  Mate Masie is dedicated to the idea of gaining wisdom, understanding and prudence through remembering the accomplishments of those who have gone before.  The exhibit consists of ten modular, free-standing photo-text panels that tell the stories of African Americans whose accomplishments in a variety of fields have had a lasting, positive impact on this nation.  Mate Masie tells the stories of: Harriet Tubman, Frederick Douglass, Nat Love, Maya Angelou, Jacob Lawrence, Lena Horne, Joe Louis, Madam C.J. Walker, Langston Hughes, and Daniel Hale Williams.

This exhibit celebrates the ingenuity, as well as the perseverance and creativity of African American Inventors.  It consists of eight free-standing modular photo-text panels which tell the stories of eight inventors:  Garrett Morgan, Clatonia Dorticus, Benjamin Banneker, Thomas Elkins, John Stanard, George Washington Carver, Lewis H. Latimer, and Marietta, Georgia’s own Lonnie G. Johnson.  The exhibit also comes with a laminated book featuring the original patent drawings for 35 inventions.  The exhibit is accompanied by the film Making It Happen: Masters of Invention which highlights the contributions of other inventors.  The film is available in DVD and VHS format.

Out to Change the World: The Life and Works of John Oliver Killens

This exhibit celebrates the achievements of Macon-born writer and educator John Oliver Killens, whose literary career began in 1954 when his acclaimed first novel Youngblood was published.  Killens success paved the way for generations of African American writers in the second half of the twentieth century.  The exhibit consists of eight free-standing, modular photo-text panels that chronicle the life and career of this nationally significant, home-grown literary artist.

This exhibition chronicles the lives and contributions of six African American individuals from Macon, Georgia, born in the 19th century.  Each overcame many obstacles and hardships to achieve national acclaim, and have a lasting positive impact on their communities, their race, and on America as a whole.  The featured leaders are Ellen and William Craft, Jefferson Franklin Long, Henry McNeil Turner, Lucy Craft Laney, and William Sanders Scarborough.  The exhibit feature eight free-standing, modular photo-text panels, and also includes images of original works by local textile artist Wini McQueen.

The travelling exhibits are modular, free-standing panel exhibits.  They can be configured to fit in any office, classroom or lobby space.

Borrowers are expected to take reasonable action to keep the exhibits from being damaged or stolen.

The exhibits are insured by the Museum.

No facilities reports or insurance information is required from borrowers.

Borrowers can book additional time for the exhibitions at a cost of $100.00 per week up to 8 weeks.

Round-trip transportation is the responsibility of the borrower, unless otherwise specified by the Tubman Museum.

For borrowers in Macon, the Tubman Museum will transport, install and de-install the exhibitions for an additional fee of $50.00.

The exhibitions are available to travel on a first-come first-serve basis.  For scheduling contact: