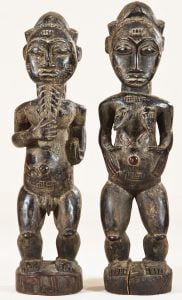 More than just secular decoration, traditional art production on the African continent has often served a ritual or ceremonial function within communities. Unlike the Western tradition, African craftspeople did not see their works as an end unto themselves, but rather as essential elements of both secular and religious life. The Western colonization of Africa in the 19th and 20th centuries led to many changes in artistic production, both in Africa as well as Europe. The spiritual energy and figural abstraction of African sculpture influenced the styles of European abstract painters like Henri Matisse and Pablo Picasso, helping to spark the Modernist art movement. Europe’s influence on African art has been more complex. Since the 1920s the development of art colleges has helped to bolster the production of contemporary arts in which African artists successfully integrate diverse, international influences into their work. On the other hand, the commercial impact of the West has been to strip away much of the function and meaning of traditional African art, turning objects that were once considered essential to a way of life into souvenirs for tourist consumption.

This exhibition showcases some additions to the Tubman Museum’s collection of traditional African art. While these objects have aesthetic value, ideally they should also represent cultural and aesthetic practices that have had an influence on the development of African American culture and history. In this way the Tubman museum’s collection is unique, in that it is not predicated on the acquisition of one-of-a-kind masterpieces, but rather on the collection of objects that help educate the public about the diverse legacy of African visual culture. Comprised of more than thirty objects and works of art, this exhibition features a selection of ceramics, masks, ceremonial and utilitarian objects. It is just a small sample of the rich artistic traditions and cultural heritage of the continent of Africa.

African Art from the Tubman Museum Collection will remain on view in the BB&T Gallery through July 30, 2022. Contact the Museum at 478-743-8544. for more information about this exhibit and other Museum programs.