Concert Only Tickets are Available for $75 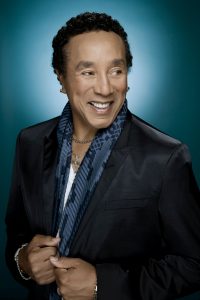 Smokey Robinson is a legend in the music industry. His career as a performer, songwriter, producer, and record company executive spans more than 50 years. As founder and songwriter for the Motown vocal group The Miracles he produced hit songs like Tears of a Clown, Ooo Baby Baby, The Tracks of My Tears and Going to a Go-Go. He wrote hit songs for other Motown acts such The Temptations, Mary Wells, The Four Tops and Marvin Gaye, and was a Vice President of Motown Records for many years. After leaving the Miracles and Motown Records, Robinson had a very successful career, performing as a solo act, he produced hits like Cruisin’, Being With You, Just to See Her and One Heartbeat throughout the 1970s and 80s.

Smokey Robinson has produced 37 Top 40 Hits over the course of his career, and he has received many awards and accolades. He was inducted into the Rock and Roll Hall of Fame in 1987. He has won a Grammy award for Best R&B Male Performance for his song Just to See Her. He was inducted into the Songwriters Hall of Fame in 1989, and he received the Kennedy Center Honors in 2006.