After the death of her second husband in 1948, Nellie Mae Rowe (1900 – 1982) spent the rest of her life creating an extensive and important collection of art.  She transformed her home in the Vinings neighborhood of Atlanta, Georgia into what she called her “playhouse.” The house was decorated on the inside with boldly colorful drawings illustrating her personal mythology.  The outside of the home was decorated with objects hung from the trees and fences.  Rowe also expressed her creativity by making stuffed dolls, one of which she named ‘Little Nellie.” Rowe completed the work Nellie in Heaven shortly before her death in 1982.  A devout Christian, Rowe attributed her prolific talent to God. 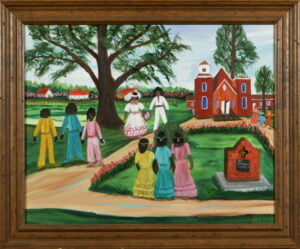 000) was a self-taught painter who lived and worked on St. Simons Island off t 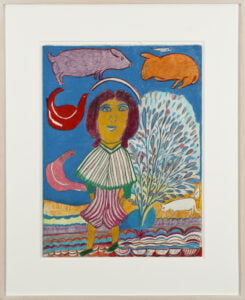 he Georgia coast.  Ana Bel Lee was born Anna Belle Lee Washington in Detroit, Michigan.  She was a social worker for 39 years.  She retired in 1984 and moved to the Georgia Sea Islands, where she took up painting.  Lee volunteered and studied painting at the Coastal Center for the Arts.  She had her first gallery show in 1985.  Her popularity increased in 1991 after her work was featured in a documentary produced by Georgia Public Television.  Her paintings often featured faceless subjects and depicted the history and culture of the island’s African American inhabitants.  Though sought after by collectors, Ana Bel Lee’s works were removed from the art market after her death in 2000.

Lee’s works in this exhibition are the newest additions to the Tubman Museum collection.  The works were donated to the museum by Mrs. Pamela Dice of Jessup, Georgia in honor of her brother, Mr. Paul Carter.  Carter was an art collector with a sizeable collection of works by Lee.  In addition to Lee and Nellie Mae Rowe, the exhibition will also include works by Beverly Buchanan, Mildred Thompson, Stephanie Jackson, and other local female artists in the Tubman collection.  A Mighty Chorus will remain on view in the BB&T Gallery of the museum through April 3, 2021.  Contact the museum (478) 743-8544, www.tubmanmuseum.com) for more information about this and other upcoming programs.