The Tubman Museum will host the inaugural Tubman African American Museum Film Festival in historic downtown Macon May 3rd – 5th. The festival begins Friday, May 3rd at The Grand Opera House with a special screening of TELL THEM WE ARE RISING: THE STORY OF BLACK COLLEGES AND UNIVERSITIES with special guest producer Stacey Holman. VIP pass holders are encouraged to join us before the film for music, hors d’oeuvres, drinks and a meet and greet with Holman. On Saturday, May 4th the festival will showcase screenings of independent documentary films at Theatre Macon, a gumbo celebration lunch at the Tubman Museum and a special screening of the 2019 Sundance award winning film ALWAYS IN SEASON with special guest director Jacqueline Olive. The day will conclude with an evening cocktail reception at the Tubman. The festival weekend will wrap up Sunday, May 5th with a free screening of the classic film COOLEY HIGH in the Tubman Museum parking lot drive-in movie.

For information about the festival schedule and tickets see the 2019 Film Festival Schedule. 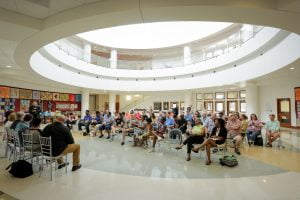