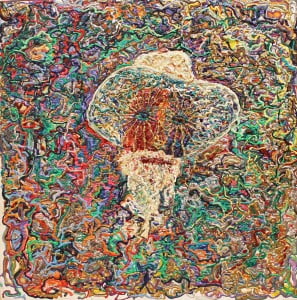 On September 26, the Tubman museum will open the final special exhibition of loaned works to be shown at its current site on Walnut Street in downtown Macon.  The exhibition is titled Last Rites.  It is a posthumous exhibition of works by Sam Zellner-Cortes, Lynn Tate and David “Blue Sky” Brannon.  The exhibition features a selection of works by three local, iconoclastic artists, each of whom sadly passed away in the last five years.  In addition to their unique artistic visions, these artists were known for their provocative comments and charismatic personalities.

Sam Zellner-Cortes (1943 – 2012), Lynn Tate (1946 – 2013) and David “Blue Sky” Brannon (1938 – 2009) were all active in Middle Georgia, but they were not colleagues.  Blue Sky had stopped making art before Zellner-Cortes began his career, and Tate remained a reclusive figure due to health issues.  While Brannon and Tate had some formal art training, Zellner-Cortes was a true ‘”outsider” who came to art-making late in life.  What the three of them shared was a common lack of concern for what others thought about their choice of materials and how they used them.

The Tubman Museum is pleased to be able to show these three artists together, and to introduce their work to a new audience.  Last Rites is curated by Heatherly Wakefield.  Heatherly is an exhibiting artist, and is Director of Fine Art for the Macon Arts Alliance.  Last Rites is the final exhibition of loaned works to be shown at the Tubman’s current site, but it is the first in a series of guest-curated exhibitions to be hosted by the Tubman Museum in the coming years.

There will be a reception to celebrate the exhibition on Friday, October 10th from 6:00 to 8:00 PM.  There will be a gallery talk by the curator beginning at 6:45 PM, and live music provided by Dean Brown and Dubshak.  The reception is free for members and $5 for the general public.  Last Rites will remain on view at the Tubman Museum through December 6, 2014.