Pink Week at The Tubman

Everyone is invited to join us as we present a variety of unique events and activities during our Pink Week at The Tubman! There is something for all members of your family and we extend a special commemorative nod to March as Women’s History Month.

Registration for the following workshops and activities is not required, but strongly encouraged. General admission applies!

Follow the Underground Railroad Workshop: Adult Edition
Tuesday, March 28 (11:00 a.m. – 12:00 p.m.)
Hear the stories of people who worked in the Abolitionist Movement and helped thousands of slaves to freedom. Learn about the ways slaves escaped and the difficult journeys they successfully and unsuccessfully undertook to reach the Free States and Canada. Learn about the importance of quilt symbols and music in providing information, methods of escape employed, and the secret messages of the Underground Railroad.

Follow the Underground Railroad Workshop: Kids Edition
Tuesday, March 28 (2:00 – 3:00 p.m.)
Children will hear the stories of people who worked in the Abolitionist Movement and helped thousands of slaves to freedom. They will learn about the ways slaves escaped, the difficult journeys they undertook, the importance of quilt symbols and music, methods of escape employed, and secret messages of the Underground Railroad.

Inventors’ Workshop
Wednesday, March 29 (2:00 – 3:00 p.m.)
Take a guided, interactive tour of the second floor of the Tubman Museum that ends at the exhibition entitled, “From the Minds of African Americans,” which showcases inventions that improved the lives of all Americans. Learn about which innovations were new and which ones were original patents that were enhanced or improved upon by others. Children will work together as teams to create something new.

Follow the North Star
Thursday, March 30 (2:00 – 3:00 p.m.)
Learn about the importance of the North Star for three prominent African Americans: Benjamin Banneker, Frederick Douglass and Harriet Tubman. Investigate Benjamin Banneker’s love for astronomy and how he was able to use the movement of the stars to create one of the most accurate almanacs of his time. Learn about Frederick Douglass’s North Star – the most influential black antislavery paper published during the Antebellum era. Discover the importance of the North Star and the constellations for Harriet Tubman as a conductor on the Underground Railroad

Symbols and Messages
Friday, March 31 (2:00 – 3:00 p.m.)
Learn how African American communities developed methods of communication without using written words. Discover the art of storytelling and the importance of Griots, interpret Adinkra cloth symbols, go on a mission directed by quilt symbols of the Underground Railroad, and interpret messages embedded in lyrics sung by slaves. 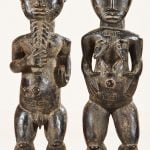