The Tubman Museum presents a ‘Father’s Day” Event featuring The O’Jays, Sunday, June 16, 2019, to be held at The Macon City Auditorium at 6pm. This special concert will also pay tribute to our “Unsung Heroes” – Our Fathers. This fundraiser will become one of our annual signature events that supports the Tubman Museum Educational and Outreach Programs.

The O’Jays are touring history, a connection to an era and a sound that formed the soundtrack for the lives of several generations. The O’Jays are still hitting the road with the same electrifying energy they have had for over 50 years.

Walter Williams and Eddie Levert first met when they were the ages of 6 and 7 respectively. As teenagers in Canton, Ohio, they formed a band originally consisting of Eddie Levert, Walter Williams, William Powell, Bobby Massey and Bill Isles. In 1963, the band took the name “The O’Jays” in tribute to Cleveland radio disc jockey Eddie O’Jay. Several members have changed, but the core, original lead singers Eddie Levert and Walter Williams, continue to front the group. 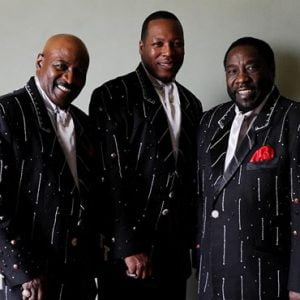 In 1972, Gamble & Huff, a team of producers and songwriters with whom the O’Jays had been working for several years, signed the group to their Philadelphia International label. With this magic formula, often called The Sound of Philadelphia, The O’Jays scored the first number 1 and million-seller, “Backstabbers.” Subsequently, they succeeded with various chart-topping pop and R&B singles including “Love Train”, “Put Your Hands Together”, “For The Love of Money”, “I Love Music”, “Darlin’ Darlin’ Baby (Sweet, Tender, Love)”, “Livin’ For The Weekend” and “Use Ta Be My Girl.” This success propelled The O’Jays to be the first black vocal group to perform in arenas throughout America during the 70s and 80s.

Eddie Levert Sr., Walter Williams Sr. and Eric Nolan Grant, who joined the group in 1995, continue to thrill fans today. Throughout their career The O’Jays have achieved 10 Gold albums, 9 Platinum albums and 10 #1 hits. It’s been a long journey but thanks to the fans the LOVE TRAIN is still going strong.