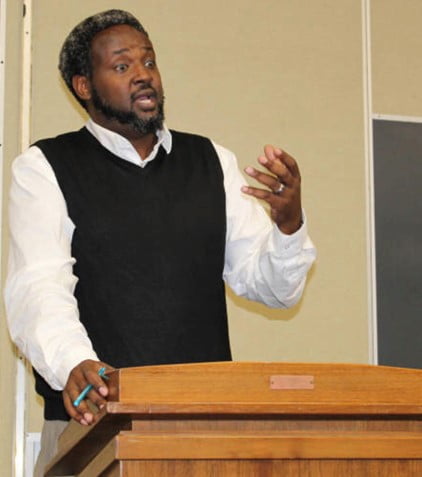 Mr. Kizito Kalima Founder & Director of the Peace Center for Forgiveness & Reconciliation was born on June 3, 1979, in Nyanza, Rwanda, to Denis and Cecilia Kalima. Kizito is the last born of ten and comes from a long family tradition of community involvement. His father was an administrator/teacher for local schools and his mother served as a health advisor to the surrounding community.

In 1994, the Kalima family was devastated by genocide. The family was separated, and many in the family, including Kizito’s parents, died. Kizito, however, managed to survive. Displaced by the genocide and without knowledge of surviving family members, Kizito found refuge in sports. He played basketball in surrounding African countries and was able to support himself in this manner.

In 1998, Kizito was offered the opportunity to travel to the United States to participate in a basketball tournament. Upon participating in this tournament, Kizito was scouted by many colleges in the US. Having not yet finished high school, Kizito was offered the opportunity to attend high school at Providence St. Mel High School in the Chicago area. Upon completion of high school, Kizito went on to attend Indiana University in South Bend, Indiana, graduating with a bachelor’s degree in Criminal Justice in 2005.

Kizito is the Founder and Executive Director of the Peace Center for Forgiveness & Reconciliation, a public speaker, and an advocate for Genocide survivors. Kizito has spoken at a variety of schools, churches, community gatherings, and events. Perhaps the most notable and honorable speaking engagement to date occurred in 2014 when Kizito was invited to share his story at the United Nations’ 20th Commemoration of the Genocide in Rwanda.

Kizito lives in Indianapolis with his seven-year-old daughter, Kayza, and has two adopted and grown Rwandan daughters, themselves Genocide survivors, Josiane and Liliane.

Mr. Kalima will have his book, “My Forgiveness, MY JUSTICE” on sale for $23.75.
20% of each book purchased will go to Peace Center for Forgiveness and Reconciliation, Inc.