The Moses of Her People

The woman known to the world as Harriet Tubman (c. 1822 – 1913) was born Araminta Ross in Dorchester County, Maryland. Born into slavery, as a child Tubman was nicknamed Minty. At the age of twelve or thirteen Tubman was injured while trying to help another slave avoid punishment. She was struck in the head with a two-pound iron weight. As a result, she would experience periodic blackouts for the rest of her life.

In 1844, at the age of twenty-five, she married a free black man named John Tubman. As a married adult she changed her name to Harriet. Five years after her marriage, fearing she would be sold farther south, Tubman made her escape. She made her way to Philadelphia where she found work as a maid and became active in the 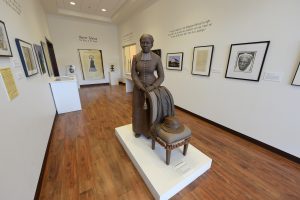 abolitionist movement. In 1850 the Fugitive Slave Act made it illegal to aid escaping slaves and gave slave owners the right to reclaim their “property” from states where slavery was illegal. This convinced Tubman to join the Underground Railroad, a network of aid and assistance for fugitive slaves seeking freedom.

Tubman’s first expedition as a “Conductor” of the Underground Railroad occurred in 1851. She led her sister and her sister’s children to freedom. In 1857 Tubman was able to get her parents safely into Canada, and eventually to Auburn, New York, where she made her home. Between 1850 and the Civil War Tubman made 13 expeditions back into Maryland. She personally led 70 slaves to freedom and provided specific instructions to as many as 60 others who escaped to the north. During this time there were many rewards offered for her capture. In 1859, Harriet Tubman purchased the seven acres of land and the house in Auburn, New York, where she lived, from state Governor William H. Seward.

Tubman served in the Union Army during the Civil War as a nurse, scout, and sometimes-spy, mostly in and around South Carolina. In 1863 she led black union soldiers on raids along the Combahee River. This military campaign freed over 700 slaves, and introduced her to Nelson Davis, a black union soldier who would become her second husband. Tubman and Davis married in 1869 and settled in Auburn, New York where Tubman began her work of caring for elderly and indigent African Americans.

Harriet Tubman remained active in the cause of equality up until the end of her life. After the war she worked for women’s rights and women’s suffrage. In 1896 she purchased 25 acres of land adjoining her home. The existing building on the new property was converted for use as the Harriet Tubman Home for the Aged. In 1903 Tubman deeded the property which included the Home for the Aged to the Thompson AME Zion Church with the understanding that the church would continue to operate the Home. When her health declined, Tubman herself was cared for at the Home that she founded. She died there in 1913. In 1995 the U.S. Government issued a commemorative stamp in her honor.