The individuals and achievements presented in this exhibit are not intended to represent the full scope of the contributions of African Americans, but rather a small sampling of objects and information about some very special individuals.  Much of the information available about African American inventors and their contributions to American life before 1910 comes to us through the efforts of two individuals, Charles H. Duell and Henry Edwin Baker. 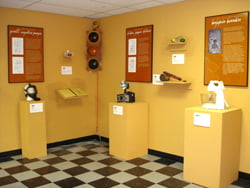 Charles Duell and Henry Baker were both employed by the United States Patent Office during the 1800s and early 1900s; Duell as Commissioner of Patents and Baker as the Second  Assistant Examiner.  Even though the U.S. Patent Office has never recorded race or ethnicity on patent applications, in January 1900 Duell began the task of collecting information on the number of patents secured by African Americans.  He corresponded with registered patent attorneys, manufacturing companies, and newspapers edited by African Americans, and from their responses recorded nearly 800 verified patents issued to African Americans.  Henry Baker published the results of this research in a pamphlet entitled The Colored Inventor – A Record of Fifty Years.  He also wrote an essay entitled “The Negro as an Inventor” for the book Twentieth Century Negro Literature or a Cyclopedia of Thought on the Vital Topics Relating to the American Negro.  Without the work of Duell and Baker, the achievements of these inventors and their contributions to American and the world would not be known.

Take a virtual tour of the Tubman Museum!

Neither Elkins or Stanard can be credited as the inventor of the refrigerator as we know it. However, Elkins’ 1879 design was an advance in the evolution of refrigeration devices, and Stanard’s 1891 design improvements made the invention more practical, and thus more useful.

Johnson is a NASA trained astronaut, engineer and inventor with over forty patents. He is a legendary businessman and inventor in his hometown of Marietta, Georgia.